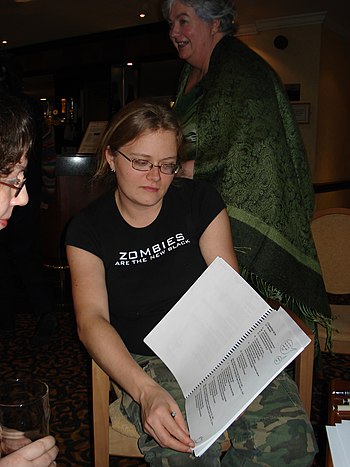 Okay, in perfect honestly I almost never read the comments of blogs (other than my own), YouTube videos … I’m not even wont to read internet forums much.  So I never noticed, until it was pointed out to me, a very peculiar phenomenon that just blows my mind and makes me wonder just how pervasive this is … I mean is it just a Paranormal Romance/SF thing, or is it all books?  Did I get some of my initial sales from this, for example?

What phenomenon is this?  People buying the author rather than the book.

I don’t understand this.  I mean, I do in the sense of, for example, I’ve met next to no Heinlein books I didn’t like, thus I will often buy a Robert Heinlein penned  story without doing more than glancing at the synopsis, and (given the single Heinlein I can’t stand, Starship Troopers) I read the first page to be sure I can get past it.  Same with Dennis L. McKiernan.   Thing is, I’m not buying the person, I don’t really care, I’m buying the writer or writing.

Now, it is true and fair to say that I’ll not be in any hurry to put money in Orson Scott Card‘s pockets, but if I discover a story of his is particularly fantastic, I can always pick it up at a second hand bookshop with no itch of conscience, he doesn’t see a dime from that.  Why?  Well, because his homophobic tirades were just a little too offensive to want to give him my cash when I can help it.

I guess I can’t understand this idea that the producer of something is the brand that needs selling.  I mean, yes, Starbucks, this is somewhat the case – that said, though, I don’t care how awesome they are as a company, how good they are to employees, how they use fair trade coffee and such … they make awful coffee!  And, in the end, the coffee is their brand!  Tazo, on the other hand, is fantastic, and Starbucks gets lots of my money for that stuff.

So I have to wonder now, did someone buy Love or Lust because they were impressed with one of my random blog posts about writing or about … stuff?  Because I shared something from The Kindness Blog?  Before tonight I’d have never wondered that.  “Of course not,” I’d say.  Then I learnt that in the comments of authors like Seanan McGuire and John Scalzi are people going “Wow, this post moved me so much, I’ve got to buy your book!”  All I can think is, I like Scalzi’s blog, he’s got a fun way with putting things … doesn’t change that his stories don’t interest me, I don’t care how much his blog posts inspire or move me, I’m not buying a copy of Redshirts, I’m sorry.  Certainly a blogpost of Seanan’s is how I got addicted to Incryptid stories, but that had to do with a part of one that was describing Verity Price from Discount Armageddon and Midnight Blue-Light Special that involved her being like the bastard offspring of Dazzler and Batman; who wouldn’t want to read that!?  It, admittedly, was in conjunction with her post about being annoyed that so many people equate rape and tragedy with character growth and … I already blogged about it, here but that’s irrelevant, I didn’t buy the book because of her views of rape, I bought the book because of Verity, I bought the sequel because of Seanan’s talented writing.

I always assumed everyone else thought this same way, certainly no readers I’ve ever once had the chance to converse with seemed to operate on any other basis besides the few who shop by genre and will read anything that’s from the Science Fiction section, or the Fantasy, or anything that’s a Warhammer 40k title, or Star Wars Expanded Universe (a rant for some other time), etc. which is understandable enough if you just enjoy wizards and warriors, or ray guns and spaceships and the rest be damned.

I’d be interested in comments on this, but I’ve learnt in the past that most people will just click like.  C’est la vie.  It’s an interesting insight into someone’s psychology … I’ve no idea what to think of it, or how to interpret it, certainly no idea what I’m supposed to actually do with this knowledge, but it’s fascinating nonetheless.