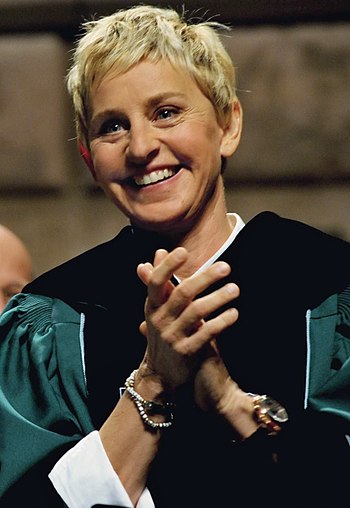 There was an article I found on Facebook, shared it too as I recall.  The Best Way to Change Minds:  Come Out, Stay Out, and Speak Out.

Of particular note, for me, is the first paragraph:

Last week my friend, Professor Jenny Boylan of Barnard College, penned an op-ed in the Los Angeles Times entitled “Trans Community Can Change Minds by Changing Discourse.” I think it’s very important that our scholars are finally being provided with a platform to reach a far wider audience, and Jenny is one of our most articulate spokeswomen. It’s also important to note that — gasp! — trans women are Ivy League college professors. I will even go so far as to say that what she said is less important than the fact that she is published in The New York Times and the Los Angeles Times. That will have a great impact on accomplishing what she stressed as the goal of her piece: changing the nature of the public discourse around trans persons and the experience of being trans.

Now, of course, it’s about the transgender community.  Applicability, a word I learnt from the late Professor J R R Tolkien‘s lovely writings on the subject of storytelling, though means it says so very much more.  Amazing how much storytelling and life can have in common if you take a moment to look around and see it.

I’m rather torn on the subject myself.  This is why I hope this will be a discussion in the comments.  It’d be interesting to see the varied opinions and discourse on the matter.  I’m a private person.  I don’t like, as I’ve said before, giving details about myself.  I’ve no problem standing up for people.  Race, sexuality, gender expression, gender identity … we’re all people.  I stand up for people because first off, it just seems the right thing to do.  None of my business if someone is a woman, man, or other.  Doesn’t matter the slightest to me if they’re Buddhist, Pagan, Jew, Christian, Islamic, or pray before an old Pepsi can from 1973.  I certainly can’t imagine being too upset about anything that two or more consenting people might like to do with/to one another.  Above all else, I’m not going to say that someone doesn’t deserve the same rights as anyone else just because of who it is that they love and find attractive.

My point is; do people in the public eye – authors, actors, politicians, etc. – do we have some obligation to be out?  And out about any of it.  Out about being heterosexual, homosexual, bisexual, pansexual, omnisexual, pepsisexual, transgender, transvestite, transatlantic, or transmitted; anything.  Does it matter?

I do feel that we should certainly speak our minds if we’re willing and able.  I’m somewhat able and somewhat willing, so I do.  But that’s not because of our being public.  I think that’s just a very good and human thing to do.  If you want to be objectivist about it and find some self-serving reason for it then how about Martin Niemöller‘s words:

First they came for the Socialists, and I did not speak out—
Because I was not a Socialist.

Then they came for the Jews, and I did not speak out—
Because I was not a Jew.

Then they came for me—and there was no one left to speak for me.

So I do, I ask:  am I right or wrong?  Is it enough to speak out, even if I will not come out cis/trans/queer, gay/straight/bi/other? I am out on one point:  I’m an out redhead and an out woman.  I’m also an out writer (exceedingly vague reference to The Notebooks of Lazarus Long).  Does it add some weight to what I say if I am Cis or if I’m trans?  If I’m gay or straight?

The article seems to think so.  At least taken in an extrapolated form.  To be fair, the article itself isn’t talking so much about the Laverne Coxes, the Ellen Pages, the George Takeis of the world.  It’s talking about the guy who bags your groceries, the woman who delivers your mail, etc.  It’s about advocating by simple example.  By not isolating yourself, as a trans person, estranged from anyone who ever knew you as your assigned gender to begin fresh and reborn as your true gender in another town all alone … It points out that, if no one can really identify with an issue, put a real face and person to it they’re not really going to feel much point in supporting the cause.  Little girls like Jazz, women like Laverne Cox; they may seem unreal to people, or isolated curiosities.  George Takei and Ellen DeGeneres; same thing.  They plant the seed, the curiosity, the vocabulary.  They shout the issues from the rooftops, but the ones who prove them right are the gay parents at the PTA conference for their’s daughters’ school; it’s the little boy struggling to be allowed to play for the boys’ team instead of the girls’; it’s your trans brother and your lesbian sister-in-law, your bi cousin.  That point I don’t argue with.  Those who know me I’m out about my sexuality with, my marital status, etc.  What I can’t seem to make up my mind about is this:  does it matter in either direction to the public?

Funny I should say this, given my post about representation, but I guess it comes down to this:  representation in my work exists.  I’d assume that my characters present far more valid role models than myself.  You get to know them, you see their thoughts, dreams, hopes, fears, all of that – you share a bond with them.  Me?  What am I?  A dyslexic typist who happens to occasionally take it into her head to string several English words together in something like a logical and coherent order.  Does this make me the kind of public figure whose personal details matters for representing anything or anyone?  I can paint landscapes populated by cis/trans/queer alike, homo/hetero/bi/pan/a whatever, but I can do that regardless my gender, race, height, weight, bust size, inseam, zodiac sign, sexuality, etc.

Is it me or is that a long list of Caucasian, cisgender, heterosexual people?  Look, writing as a profession or even hobby doesn’t actually need representation, does it?!  I mean, the anonymity of the pen/keyboard?  How many authors use pseudonyms!  I mean … people know this right?  I mean were I gay or bi or whatever, that wouldn’t make a difference to whether or not some little girl who falls in love with my books decides to take up the quill and tell her own tales … would it?

Life would be so much easier if humanity weren’t so caught up on the idea of finding reasons to look down on one another.  I mean, aside from obvious ones like rape, murder, theft … people are starving, and there’re religious groups spending money and energy on fighting the legality of Portia and Ellen’s marriage.  Really?!

Still, these comments are no less moderated than any others.  Your comment won’t show up unless you have a previously approved comment or unless I hit the magical, mystical approval button.  But, you know, discuss away.  Between the comments and my own soul searching, maybe I’ll get around to writing up some kind of bio about myself.  Maybe I won’t.  I’m still leaning to “it doesn’t matter”, besides … could turn out I’m just as status quo as Ms Rowling; at least with the silence there’s a mystique.

7 thoughts on “A discussion, I hope.”