So, Tumblr is instituting a rather draconian adult content ban. 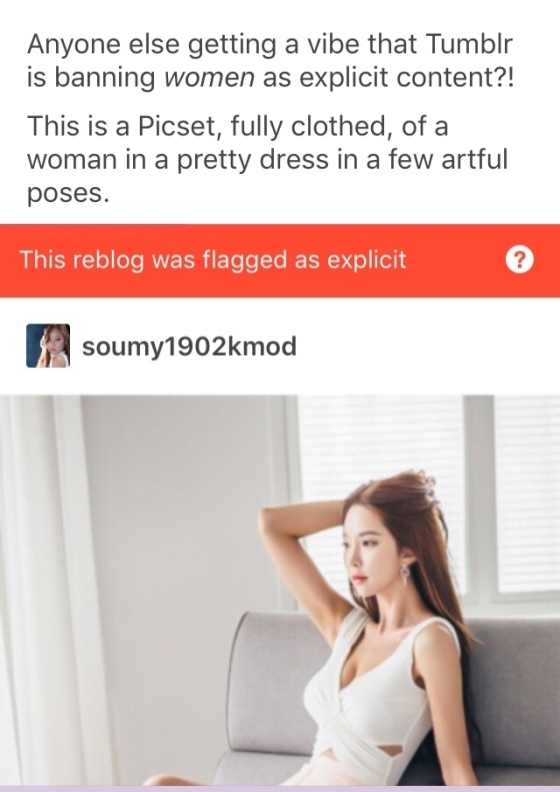 I'm so done with @tumblr right now you gaiz. pic.twitter.com/KmGVD5RdYv

So some may be wondering if I will remove/abandon my Tumblr. An excellent question. No. Mostly because I don’t and never have exactly used my Tumblr in the first place. 99% of its content is links back to this blog automatically generated by WordPress. So while I’m ethically opposed to what they’re doing, I shouldn’t think my content there is contributing much to them in any capacity.

Now, that isn’t to say I won’t change my mind. For example, if they don’t get this algorithm under control and – as the first example above speculates – keep flagging any pictures of women then I will absolutely delete my Tumblr and ne’er return to that desolate wasteland. But if they sort themselves out to actually only exclude porn and nudity … 🤷‍♀️ … I certainly don’t condone the decision because I support the idea of people who wish to use their beauty as a source of income or merely as a source of pleasure by its sharing then that’s their right and I certainly am a vocal advocate that nudity isn’t sex and therefore the outright topless/nude ban regardless of context is horrifying.

That was probably a lot of horrible runons and atrocious sentences that even Tolkien would say go entirely too far, but to hell with it, I’ll edit this post later.

So, tl;dr: Yes, Tumblr are wankers. No, I haven’t immediate plans to abandon ship since I’m actually following in a tethered dinghy anyhow, but if they’re bigger wankers in future I will drop them in a trice.