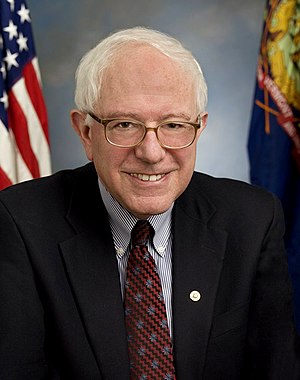 Those who follow my twitter will have noticed that I shared a survey regarding Bernie Sanders‘ notion of running for the US presidency.  That survey, for those interested, can be found here:  http://bit.ly/18cujsk

This is one point where I feel I must voice my opinion.

Senator Sanders represents certain ideals that this country is long overdue for.

He represents the notions of equality under the law:  I don’t care if you are gay or straight, cisgender or trans, man or woman or eunuch, black or white or green the right to live your own life should be fundamental.  I mean, come on America; England and several other European countries with a state religion have this equality yet with your first amendment protection of religion you don’t?!  Does anyone else see this as something that should have been positively embarrassing and immediately passed the day it happened in the Old World?!

He represents the idea that that health care should be available to all.  This one can probably be argued on the grounds of logic, but I’m too passionate on the subject so will posit a moral argument:  if this is the Christian nation that so many opponents of nationalised health care say it is, then this country should have had national health care from its inception.  Now, this isn’t a Christian nation; freedom of religion and the states shall establish no religion, et al ensures this.  That doesn ‘t mean, however, that moral arguments are invalid here.  Any faith I’ve ever encountered has provisions that say that we should care for our fellow man, therefore it ought to include that a man in need of medical attention should not need to check his pocketbook before deciding if he ought to seek medical attention; and health insurance is not health care of any sort, health insurance must be paid for whether used or not and there is still cost to the user even if it is reduced.

He represents the idea that, if the employers of this country do not wish to pay their employees sufficiently to live, then there ought to be laws to enforce that they do.  It’s a sad enough state of affairs that this is necessary.  Certainly not all peoples are so inconsiderate, there is no minimum wage law in Norway, yet they have one of the lowest disparities between the mailroom and the boardroom of any nation in the civilised world.  Minimum wage came to be in this country because employers would not pay people enough to buy a loaf of bread after a day’s work, the number of employers who fight against raising it or its very existence proves that they’d gladly go back to doing so; again, I don’t care what name you give to God, simple concern for your fellow man should say that this is important.  Again, I’m sure, for those who have no gods, there is a logical argument.  Ah!  Yes, this:  if people have money then they can buy your goods; if they don’t, they can’t!  Simple notions of profit ought to dictate that paying your employees sufficiently to have a home, utilities, and then something left over to buy your products with …

Put succinctly, I support people like Bernie simply because I believe wholeheartedly in every variation I’ve ever seen (some 100+ … I found a list once) of “Love thy neighbour as thyself”.  This means a lot to me.  I shan’t tell my neighbour the name and face of God, if she will give me the same courtesy (even if she doesn’t, I won’t, because I’m none too thrilled when she does it); I would want to know that, should I fall on hard times, I can still seek medicine and buy food, have a home, and other such things just as I want that for my neighbour if he falls on hard times; we all ought to wish one another the happiness found in being married to he/she/other we love.

I often look at my feelings and statements on this and will feel they are preachy and heavy-handed, but then I realise something:  the arguments against these ideas, every last one I’ve seen, are illogical, immoral, selfish, self-serving, short sighted, and often downright cruel.  Needless to say, given that, I do feel inclined to voice my opinions as loudly as I might in the hopes of swaying those people to a more chivalrous and noble point of view — a world of people who love, cherish, and care for one another, one that respects the humanity and lives of each other, is a world I’d far rather live in than the one we currently have.